Even if you have learned the basic proportions for drawing a standing person, there are a few changes to consider when drawing a person running. The limbs are in constant motion and opposing positions. Not only that, but we also have to remember that arms and legs will appear different when they are closer to us or farther away from us.

The first step is to draw a rough outline of the running man. Keep standard proportions in mind for the head and torso. You can even sketch in some guidelines to draw the face later.

Now as for the arms and legs, the limbs are alternating. You see in this example that the runner’s left arm and right leg are out, while the right arm and left leg are to the rear. Here is where things might get a little confusing. You will need to foreshorten the arms and legs. This will cause them to appear distorted and out of proportion with each other. However, this is necessary to create an illusion of depth.

The right upper arm appears very short compared to the forearm. Since the elbow is so far back, it is hard to appreciate the full length of the upper arm from this angle.

There is some foreshortening with the left arm too, as it is in the foreground. For this reason, the arm may appear shorter than it should compared to the torso.

The runner’s right leg is extended. Since the upper thigh is farther back, it should seem slightly shorter than usual compared to the lower leg. Draw the sole of the shoe to indicate the runner’s foot getting ready to meet the pavement again.

The left knee in the background is drawn much lower than the raised right knee in the front. The left lower leg should be barely visible since it is pointing to the area behind the runner. As for the running man’s left foot, this time we will see the top of the shoe.

Draw in some details for the man’s face, head, and neck. Since he is running, you might want to draw loose hair with strands scattered in different directions, tired-looking eyes and eyebrows, and an open mouth that is catching a breath of air.

Next it is time to draw the man’s shirt. Keep in mind how the man’s torso twists and turns as his arms move. This will help you to place the folds of the shirt’s fabric. For example, since the right shoulder is twisting back and pulling the shirt from below, there are folds flowing up from the man’s bottom left toward the upper right. Plan to draw spiral folds and other basic fold types for a realistic rendering of the shirt.

Draw the Arms and Hands

Finish drawing the sleeves of the shirt. Then move on to drawing the arms, adding a little muscle definition. Next, sketch in the fingers and complete the hands. People do all kinds of things with their hands while running. Sometimes they keep the hands loose while other times the hands are clenched fists. Draw them in a way that is easy for you. The man running in this picture also has a watch to time himself.

Draw the Legs and Shoes

Complete the man’s running shorts, with fabric folds coming from the inner legs moving back and forth. Add some definition to the thighs and right knee. Also draw in some lines to detail a lean shin. Afterward, draw in some details to indicate the sole of the right shoe and the top of the man’s left shoe.

If you haven’t been doing so up to this point, it is a good idea to take a step back and look at your drawing. Mostly look at the proportions and foreshortening that might have looked distorted after your initial basic outline. Sometimes, a drawing that has foreshortening will look less distorted after more details are added.

Erase any unwanted guidelines in the face or other parts of the figure. Add in as much shading and extra details as you want.

A simple yet cool effect to enhance the appearance of running is to place a little shadow under the foot, showing it is off the ground.

And that is how to draw a man running!

For a quick visual recap of this tutorial, take a look at the image below. It shows you a step-by-step summary progression for how to draw a man running.

Besides the foreshortening of the arms and legs, you can see that it is not much different from drawing a man who is standing. The next time you feel like drawing and you decide you want to draw a man running, I hope you take the tips from this tutorial and “run” with them! 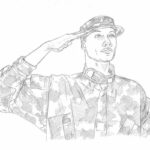 How to Draw Someone Drinking Beer 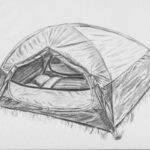 How to Draw a Tent with a Dome Shape 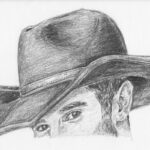 How to Draw a Cowboy Hat on a Cowboy