If you have ever struggled to draw a picture of two people hugging, it’s very understandable. Sometimes it can be hard enough just to get the right positioning for one figure, let alone two. In addition, you have to make sure the two figures you are drawing complement each other in a positive way for the overall picture.

Another thing about hugs is they don’t all look alike. Depending on what kind of a hug you are trying to draw, you may have to tweak your approach.

In this post, I want to show you four very easy ways to draw two people hugging. No matter which pose you use, the best advice I can give you is to sketch out the general shapes of the two figures to get their positioning right with each other.

In the examples below, you will see these basic sketched figures rather than completed drawings, because once you get the shape of the figures sketched right, you can always go back and add details to develop the faces, arms, hands, and clothing. I drew these with a soft 4B pencil so they would appear darker for you, but since these figure sketches will serve as guidelines for your final drawing, it’s best you draw them with a harder graphite pencil for a lighter effect.

Each method has three basic components for each figure: an oval shape for the head, a rectangular shape with rounded corners for the torso, and the rough outline of the arms and hands.

Method 1: Draw People Hugging from Behind the Back

If you are drawing a picture of one person hugging another from behind the back, you are obviously going to have some overlap to deal with, so some of your basic shapes will be missing or hidden. In this example, you can start by drawing the head, body, and arms of the person in front. The torso of the person behind is hidden, so you don’t need to draw it. It is still important to get the right placement of the head and arms of the person in the back.

You can see more overlap with the arms from behind coming to hug the person in the front. Once you get the right placement of the major shapes, just erase any guidelines that will be behind another body part (for example, the guidelines behind the forearms).

Method 2: Draw People Hugging Side by Side

When people hug side by side, as in this example, they are usually sitting side by side and facing the same direction. As opposed to directly facing each other, their bodies are slightly twisted toward one another. There are times when they can do this standing as well.

For this sketch, I drew two ovals for the heads that are leaning in to one another and looking forward at the viewer. Each rectangular torso shape is slanted at a slight angle. Then you can draw the arms, one over the other in the front. You won’t be able to see the arms behind each back.

Method 3: Frontal Hugging Over the Shoulder

Here is a classic position for hugging. This is the first position I usually think of when I think about people hugging each other. Even so, it’s not the ideal or popular position for portrait drawing, since one person is facing away and the face we can see probably has her eyes closed. Still, it has its place with other types of drawings, so we will take a quick look.

Once again, there is major overlap with this hugging position. You will have to use your judgment as to the extent of guidelines you want to use. I find it helpful sometimes, as in this example, to still sketch what is hidden by the arm and torso in the front. This way you can get an idea if the proportions of one person look right in isolation. Don’t forget to draw heads that are side by side with a slight overlap and facing away from each other. Then draw an over-under positioning of the arms.

You might use the positioning of the figures in this sketch to draw a hug shared by a loving, romantic couple. With this type of hug, the bodies are facing each other as in the last example, but the faces themselves are also facing each other. You can also draw the faces so they are both looking at the viewer, which would make this an excellent choice for a portrait drawing.

You will have to adjust the width and angle of your rectangular torso shapes so they appear to be close to and facing each other. This will make it easier to sketch the arms so they have the natural appearance of wrapping around or resting upon the other person’s body.

These four ways to draw people hugging certainly are not the only hugging positions you will encounter. Hopefully though, these examples will show you that it’s not as hard as it may seem to draw people hugging. It really is only a matter of sketching the basic shapes to get the right size and positioning before moving forward.

If you want to get better at drawing people hugging, begin by experimenting with these four simple methods. Try different attempts and angles until you get something that looks right to you. Then try making tweaks to the positions in your sketches. Look at lots of reference photographs to see the countless other hugging positions you may find yourself sketching someday. Practice sketching as many different positions as you can. Soon you will find it much easier (and more fun) to draw two hugging figures! 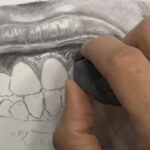 What Is a Kneaded Eraser? Meet Your New Best Friend 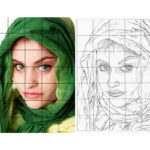 How the Grid Drawing Method Will Make You Have Improved Art 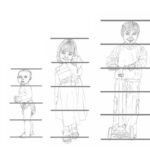