How to Draw a Tent – Intro

Shade the Inside of the Tent

Darken the Outlines of the Tent’s Inside

While still using your 2B pencil, use a little more pressure to start outlining the lightly sketched lines of the inside of the tent.

Begin at the far corner, then work your way to the far inside wall. Then darken the outlines of the bedding.

Do some preliminary shading of the far inside wall, or mesh door, before moving on to the bedding.

Put some light shading on top of the pillows. Then work your way down the rest of the bedding.

Shade from the pillows down to where the foot of the sleeping area would be. You’ll notice here that I sketched in some darker lines running the length of the bedding to signify some of its texture.

Add Darker Tones to the Inside

Since the inside of the tent has many darker tones compared to the outside, now is a good time to switch to the 4B graphite pencil.

Start by filling in that dark curved border of the mesh door on the far side.

Keep shading some of the darker design elements inside the tent. We’ll even shade the band going across the front mesh door.

Continue adding darker tones to the walls and surfaces found inside the tent. Pay close attention to the pressure you place on the pencil. Try to find a balance between dark tones and slightly lighter tones. Here I’m going for darker tones adjacent to slightly lighter tones. I don’t want to shade two different objects or surfaces exactly the same shade. If I did, it would be harder to distinguish them from each other.

For example, the pillows are a lighter tone. So as I shade just above the outline of the pillows, I’m going for darker tones.

Then I am slightly lightening my touch as I approach a similar dark tone, which is that horizontal band that goes across that side wall. 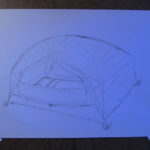 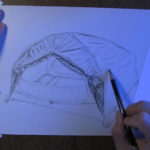 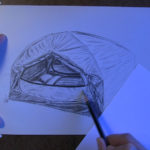 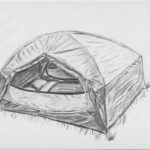 How to Draw a Tent – Intro