How to Draw a Rose – Intro

Shade the Curved Petal Under the Middle

Now we are going to shade the large curved petal under the center petals of the rose. For this petal, I’m going to mostly shade in a direction that follows the length of the petal. Begin by lightly shading along the edge. Leave a thin section of reflected light at the edge.

Now put an additional layer of darker shading over the first lighter shade. Put some dark shading next to this little ripple at the edge of the petal too.

Keep working your way down toward the other end of the petal. Shade in the same manner as before. It’s also okay to use some short up-and-down strokes to mix with the horizontal strokes for a crosshatch effect.

Put some very light lines going along the lighter area of the petal. Near the center of the petal, there is a bit of a dip in the petal’s surface that we can indicate with a few well-placed darker tones that follow the curvature of the edges nearby.

Let’s finish up this petal now. Begin with a light shadow on the top left. Sharpen up this long edge along the inside shadow area. Then put another light shadow at the other end.

Shade the Large Petal in the Middle

Next, we need to shade the large petal in the middle. Begin with a light application of tones. If you recall the egg-shaped guideline we sketched at the beginning of this drawing, we are at the bottom of the egg now. Since this is a very curved surface, your pencil strokes can go in different directions, as long as you stay aware of the curved edges as you shade.

As we have been doing throughout the drawing, we basically begin with a light layer of shading and apply a darker layer wherever needed on top of it. Let’s continue to do that now. We can also do some preliminary work on this flap here, like adding a rip at the edge and a little soft shading. This flap is casting a shadow onto the surface behind it, so let’s put that shadow along the edge.

Put some darker tones atop the lighter tones along the edge. Notice how these two tones are almost the same value. That’s why it’s important to have the reflected light here to separate the tones. It looks more natural that just having a darker pencil outline.

Most of this flap is going to stay white. Let’s just put some added detail near the top, like a little dip in the surface. We’ll put some soft shading too.

Shade the Next Two Overlapping Petals

Now we will shade the next two overlapping petals. Start by outlining the edge of the flap. Put some light shading on the round surface of the petal’s base and along the edges. Put a dark shadow under the center petals on the large petal underneath that sticks out.

Place some darker tones along the edges. Place some lighter diagonal hatch marks in the light area of the petal. By applying just a tiny bit more pressure in some areas, the alternating light-dark pattern helps you to create the appearance of raised and low surfaces on the petal.

Next, we can work on this tiny curled flap here. All we need is a little strip of shading in the middle and then we should put more definition along the edges.

Okay, now we are basically working our way inward, from the outer petals to the next petal closer to the middle. We’ll just put a little light then darker shading on this next one. While we are at it, we can do the same to the lower part of this big tall petal on the other side.

Work your way back toward the center and the petal we were just shading before. Put some shadow on the inside and just under the flap. Put some very tiny marks on the flap itself near the edge to complete the petal.

Shade the Small Petals Near the Stigma

Keep shading as you work your way closer and closer to where the stigma of the rose is located. With this next petal, we’ll do a little outlining first, then have darker shading at the base. Lighten your touch as you get closer to the flap at the top.

Use basically the same method on the next petal. I will, however, make some darker tones near the top of this one just under the flap. Sketch some dark tones on the inside where this petal coils and wraps around the center.

Before completing the center, let’s shade some of these petals surrounding the center. Keep your pencil strokes short and hatchy.

Now shade the very center of the rose, where all of the center petals are wrapped around the stigma that we cannot see. Use a mix of light and dark tones. 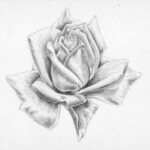 How to Draw a Rose Intro – Getting Started 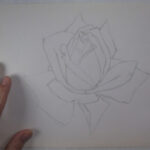 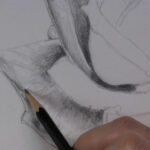 How to Draw a Rose Part 2 – Shade the Left Petals 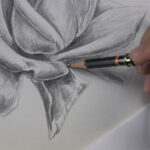 How to Draw a Rose Part 4 – Shade the Right Petals