Shade the Fourth and Fifth Sections

Use an HB pencil to shade the section between the previous rib and the next one. This middle portion of the pumpkin is curving farther away from the direct light source, so any highlights will not be nearly as intense. Therefore, we don’t need to worry too much about preserving any predetermined highlights. Let’s just create a base layer of tones over the entire section.

Keep using the HB to shade a slightly darker layer of tones over the first layer. As I look at the reference photo and notice additional subtle impressions in the surface, I see similar impressions in some areas of the pumpkin I already shaded that cut into the highlights. Back to the part of the pumpkin I’m working on now, I leave the area near the top a little lighter, but I bring the slightly darker tones down toward the bottom.

Use a 4B pencil to go over the section once again. Focus this time on only the areas that need the darkest tones. As you shade along the rib, notice that this rib doesn’t need the same dark tones as the previous rib because it does not go as deep into the shell. Shade the bottom like you shaded the previous sections, leaving some lighter values and reflected light adjacent to the darker tones.

We’ll use an HB to start lightly shading a base layer for the next section. As I’m sure you have noticed by now, we are pretty much repeating the same process over and over as we shade each section of the pumpkin. That’s really all there is to it. Once you learn the basic steps, it’s just a matter of easy repetition.

Shade a slightly darker layer of tones over the base layer. This second layer will cover nearly the entire section. It’s still wise to leave the edges lighter to allow for reflected light as the skin gets pulled into the ribs.

Go back to the 4B to trace over the rib directly under the stem. Add some tones near the top, in the middle, and along the bottom. Go back to touch up other areas of the pumpkin whenever you feel a need to do so.

Shade the Sixth and Seventh Sections

While we are over here working on the left side of the pumpkin, and seeing that we are almost finished with the left side, we can go ahead and finish up this section at the top. I’ll just use an HB to add a little bit of shading. For this second section closest to the pumpkin, I’m putting a little shading along the border and some slightly darker shading at the base near the stem. That leaves us with this little band of highlight.

Looks like we are halfway done with the pumpkin itself and just about done with the stem. Next, we’ll keep plugging along by shading the next section of the pumpkin’s shell. Use the HB to shade a base layer of light tones. There is a thin section of highlight along the top of the rib that I’m going to allow for, just like we did with the first sections. Work your way down the pumpkin. Allow for the reflected light along each side, too.

Add a second layer of darker tones with the HB pencil. Let some of the base layer show through, but still shade over a good portion of the skin to indicate impressions, blemishes, or other discolorations of the skin. Now, if you are looking at the reference photo, I’m sure you have noticed tiny spots over portions of the pumpkin’s skin. I haven’t forgotten about those. We will add those spots near the end.

Use a 4B to go over darker areas of the section. I don’t really see the need to put a whole lot of shadow on this section. As I look at the reference, it has neither a lot of highlight nor a lot of shadow. Just put some shadow along the top, near the ribs while preserving some reflected light, and at the bottom.

Use your HB pencil to shade the next section. There is a sliver of highlight along the upper right portion of the section along the rib. I’m also leaving the area near this bend in the middle of this rib to the left a little lighter than the tones I’m applying.

Switch to a 4B pencil. Outline the rib of the next section. This rib will be another one of the really deep ribs, so we should make the entire line nice and dark. Then, overlay some darker tones on the base layer from the last step. This side of the pumpkin is on the opposite side of the direct sunlight, so it will have a little more shadow than the left side. It won’t be too much more, because it is outdoors and there is light coming from other directions too. Put some more shadow near the bottom.

Add More Shading to the Stem

Before moving on to finish the pumpkin’s shell, I want to add a bit more detail to the stem. While I still have the 4B, I can enhance the texture and appearance of the stem by adding more shadow near the base. Leave little areas lighter while still covering the majority of the stem’s lower area with darker value. This extra shadow also makes the dip at the top of the pumpkin appear deeper.

While we’re at it, let’s add a few more shadows to the ridges on the upper portion of the stem. Since the light is mostly coming from the left, keep most of your marks to the right side of the stem. 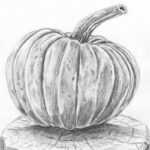 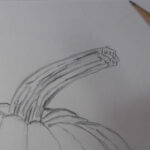 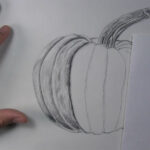 How to Draw a Pumpkin Part 2 – Begin Shading the Pumpkin 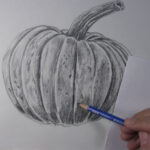 How to Draw a Pumpkin Part 4 – Finish Shading the Pumpkin