Shade the Rest of the Face

Even though we are finished with drawing the mouth, we do not yet have a finished drawing. Let’s shade the chin and then the rest of the face to complete our drawing.

Begin by darkening the shadow that is directly under the lower lip.

Now, put a light base tone over the entire chin area. Use diagonal strokes that are close together. Make sure to go into areas previously shaded so we can make smooth transitional blending afterward.

Look for areas that should be darker. Some of these should be apparent by our previously drawn guidelines. Some darker areas are a continuation of shading we already did on the right side of the woman’s face. Shade along the bottom of the chin too, keeping a strip of reflected light to separate the chin from the darker shadow tones of the neck.

Now let’s blend what we have before seeing what else we need to do with the chin. I’m working over the lighter areas first and slowly going over the darker areas after that. Also, I notice that the reflected light of the lower lip looks brighter than it should now with that cast shadow under it, so I’m going to lightly blend over it to lower its intensity.

We need to darken up parts of the chin area a little bit more. I’m going to use my grid and light box, since some of the areas that need to be darker are kind of subtle. The darkest areas will be along the bottom of the chin.

We will blend these tones now. This will leave us almost finished with the chin.

I notice one big area of highlight that I need to lift, so I’m going to use circular strokes with my kneaded eraser to accomplish this. I also see an area to our left of the highlight and below it that needs a little more shadow.

Blend over the darker tones. Then use circular strokes to blend around the highlight of the chin to make it look soft and natural. Pull out a few smaller highlights along the bottom edge. That will do it for the chin!

Shade the Other Side of the Face

There’s not much left for us to do. We will work on the other side of the face now.

Put an initial layer of light tone on the paper. Just as we have been doing before, use soft, diagonal strokes to establish a base.

Where there are some darker areas, like the smile line areas, be sure to shade them with darker tones. We don’t see as much of the ball of the cheek on this side as we did on the other side. That’s because there is more light on this side of the face. We still need to be aware of more subtle variations of values.

Use your blending stump to blend this side of the face now.

There is a little bit more darkening of a few areas that we can do. Most of these areas are around the smile lines and along the outer edge of the face.

Then blend broad areas of tone again with a blending stump. You can soften the outermost edge of the face with a tortillion.

Use your eraser to get all of the smudges that fell on the outside of the face. Also, lift the reflected light on the chin, fading it out close to the edge of the neck. Speaking of the neck, we can focus on that next!

Take your mechanical pencil to sharpen up the edge of the chin. Then pull all of this dark tone into the very dark shadow area of the neck just below the chin.

Smooth over the graphite with a blending stump. Use a tortillion for the tighter areas near the head. Lightly go over the reflected light on the chin to make it slightly less bright.

Put a little more shading under the chin and on the lines of the neck that we marked earlier.

Use a tortillion to blend the darker tones into the lighter tones. Soften the outline of the side of the neck.

Take a final look at the entire drawing. In case there is any smudging on the white background areas of the drawing, use your regular eraser to go over these areas to remove any smudging that you may (or may not) see.

And that is how to draw a mouth….a very detailed mouth with realistic lips and teeth! 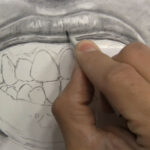 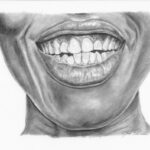 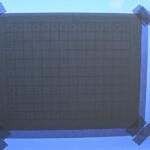 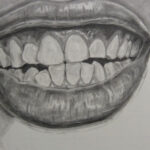