How to Draw a Kitten Face – Intro

How to Draw a Kitten Face – Part 1

How to Draw a Kitten Face – Part 2

Add Details to the Kitten’s Eyes

Next, we can begin working on the eyes. I’m still using a 2B pencil. Even though I maintained most of my outlines when I erased the guidelines, there are a few spots that got smudged by the eraser. I’m going to retrace the outline of the first eye. Then, I’ll draw the pupil. A kitten has a very different pupil from a human. Draw a vertical slit slightly left of center that still curves on the kitten’s eyeball. Do the same for the other eye. Darken the outline of the eye. Then draw the pupil a little left of center.

After that, very lightly draw the outline of the highlights in each eye. There is one major highlight in each eye. Both have an irregular shape. This first one intersects the pupil about halfway and covers its lower half. This second one is similar but is shaped slightly different. You can mimic what I do and also look at the reference photo to properly shape the highlights in your drawing.

The outer edge of each of the kitten’s eyes is much darker than the rest of each eye. It is a similar value to the dark pupil in the center. We can start defining this outer edge now by outlining along the inside of each eye. Put a round edge against the inside corner of the eye to give more shape to the eyeball. Do the same along the outside corner.

Lightly shade the eyes. Stay consistent with your pencil strokes, maintaining the same direction as much as possible, except for when you need to curve around the edges. Shade around the highlights to leave them free of any pencil marks.

Put another layer of light shading in the eyes. Make this layer slightly darker than the shading from the last step but not as dark as the pupils and edges. Don’t shade the entire eye with this second layer. Just focus on enhancing a few spots around the edges and next to some of the highlights. We can see in the reference photo that this kitten has lots of rich color in the eyes. All we are doing is making a very basic representation that still reflects some of this tonal variety.

Shape the Nose and Mouth

This next step is optional. We talked earlier about how I am drawing the kitten’s mouth more open than what we see on the reference. Here, I am still deciding to leave it open, but I am bringing the lower lip a little closer to the top of the mouth.

Draw a Furry Pattern Around the Eyes

Now we can start drawing some of the furry pattern around the kitten’s eyes. Starting with the eye on our left, draw a curved line above the eye. Bring a zigzag line back above and tapering over to where you began. Make a similar pattern over the other eye, although this pattern will neither taper nor connect at the ends.

Begin to draw a furry zigzag outline above the uppermost line. Then, return to the first eye. What we are doing now is sketching the basic outline of the light-colored furry pattern that is around the kitten’s eye, extending into the forehead area, and running along the short bridge area of the nose.

Continue drawing the outline of the light-colored furry pattern that is just to the left of the kitten’s left eye. Bring the pattern down past the eye. There’s a little hook we can draw at the lower end. Then work your way back up towards her forehead.

Sketch light, short strokes to resemble hair. Sketch some fur in the middle that connects both sides. Finish the top of the pattern above the eye. Draw it branching out in a couple of different directions. Sketch a curved line close to the eye border. Then sharpen the edges around each eye.

Now, let’s put another layer of shading over the eyes. This time, shade the entire eye, but still shade around the highlights. Since we are starting to put more tones around the eye area, we don’t want the values of the eyes to appear softer than they should be.

Add Minor Details to the Ears and Mouth

Take some preliminary steps to shape the ears. Sketch a diagonal line running parallel to the edge of the ear to our right. Then start shaping the lower end. Draw a similar diagonal line on the other ear.

Focusing on the mouth area now, start sketching some marks, spots, and other tiny dots. This area is where most of the whiskers will originate. We will save drawing the whiskers as one of the final steps of the tutorial. For now, draw these dots in diagonal rows sloping downward from the nose. Make the top rows out of thicker spots. Make tinier dots for the lower rows. 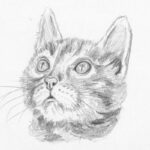 How to Draw a Kitten Face Intro – Getting Started 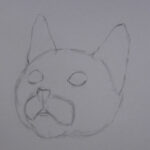 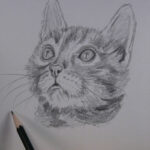