How to Draw a Hamburger – Intro

How to Draw a Hamburger – Part 1

How to Draw a Hamburger – Part 2

How to Draw a Hamburger – Part 3

How to Draw a Hamburger – Part 4

How to Draw a Hamburger – Part 5

How to Draw a Hamburger – Part 6

How to Draw a Hamburger – Part 7

Now it’s time to shade the actual hamburger beef. Start with a 2B pencil.

Aside from the shadows under the top bun, the hamburger meat will have the darkest pencil tones of the entire drawing.

Even so, we’ll begin with a light layer of shading, since there will be some lighter areas showing through between all of the dark patches of the burger meat.

So for now, I’m using a vertical stroke parallel to the outer edges to shade the side of the burger. I’ll get to the top in a little bit.

I’m also using kind of a wiggly motion in and around these little dimples sketched in the side. I will be shading over these, but I do want to still be able to see them so I know where to apply the darker tones later.

Continue shading along the side of the hamburger patty in the same manner. Shade lightly over the markings so as to not lose them. Shade all the way to the opposite edge of the patty.

Grab your 4B pencil for the next step, which will be shading the top of the patty.

Begin by outlining the lower edge of the left tomato slice.

Outline the slice of cheese as well. Make sure to maintain the reflected light along the lower edge of the cheese.

Now, fill in the area on the top of the burger patty that is visible on this side. As you can tell, I’m not holding back here. I’m placing very dark, heavy tones to reflect the dark values we see on the burger.

Extend the pencil tones toward the edge. Loosen your touch only slightly.

We’ll do the same on this side. First, outline the cheese. Again, maintain the reflected light.

Next, outline the lower edge of the tomato slice all the way across.

Shade the top of the hamburger patty here on the right side. Apply enough graphite that creates dark value comparable to what you have on the other side.

Sticking with the same 4B pencil, let’s work to develop some of the texture across the side of the burger.

Start making marks in the side of the burger. Use the lightly sketched guidelines from the line drawing as a guide, as well as the reference photo, but don’t feel the need to stick perfectly to either one.

Just some random, abstract, wiggly shapes are all that you really need. Try to shade them the same dark value as the top of the patty.

Continue the same pattern from left to right. Create more of the marks closer to the cheese.

We should have this area next to the cheese shaded a very dark value too. Begin by outlining the left edge.

Then, sketch some dark curved lines that cradle the bottom edge of the patty and surround the markings in the center.

Finish outlining the edge of the cheese slice.

Then continue to shade in the same manner around the corner of the cheese slice.

Shade the dark markings on the right side of the burger in the same way you did with the left side. Begin by shading to the right of the corner of the slice of cheese.

As you shade along the bottom, it’s a good idea to trace along the tiny lettuce leaves that sit under the burger patty.

Keep shading along the bottom edge of the burger all the way to the end.

Outline the bumpy outer edge of the burger patty.

Put some shading at the top edge of the patty under and around the tomato slice.

Then have some of the markings curve downward to settle in between the markings in the center of the burger patty.

Use a 2B pencil to shade the seemingly empty space in the center of the burger.

Shade from the top dark area down to the lighter areas below. Move your pencil freely around the bumpy texture of the burger’s surface. These marks should be darker than the base layer you are covering but lighter than the surrounding shadow areas.

We didn’t yet outline the lower edge of the burger that borders the lettuce here like we did on the other side. Let’s do that now.

As you shade over the light areas, you can leave “highlights” in some spots. These aren’t going to be very visible or true highlights by any stretch, and they may very well be shaded over.

At any rate, even though the beef has very dark tones compared to the rest of the drawing, there should still be some apparent transition from dark to light areas, no matter how subtle.

Place some dark shading on the burger directly next to the right edge of the cheese slice.

Then continue to shade the spaces beyond the right side of the cheese slice. Shade in and around all of the various bumps and dents in the beef.

Keep shading the beef patty until all of the area of base shading is covered with darker tones. You should still see your previously applied areas of dark shadows showing through this most recent layer.

Switch now to your 4B pencil.

Shade along the lower edge of the burger patty. Use this opportunity to define the sharp, clear border existing between the patty and the thin layer of lettuce directly under it.

By placing these dark, heavy tones next to the lettuce leaves, which will be much lighter in value, it will help the lettuce to stand out much more clearly in our drawing. It will help to “push” the leaves forward so they appear they are sticking out at us.

You can see a similar effect up here with the cheese. With the dark and light tones placed so closely together, it helps to add realism and a level of dimension to the objects.

Well, well, I’m using so much graphite here that even with this paper between my hand and the drawing surface, I’m still smudging my drawing paper a bit from what’s on the barrier paper. It pays to refold or replace the barrier paper periodically in cases such as this.

Just a few more spots here and there, and I think we can wrap up the shading of the hamburger patty!

Okay, let’s see if I can clean this paper up a little bit more before continuing. I’ll use my plastic eraser.

I’ll do a final erase around the drawing again at the very end, but I want to just get some of this smudging off of the surrounding areas now.

Then I’ll get a few more spots on the other side.

I’ll clean up the lower bun area too.

How to Draw a Hamburger – Part 7 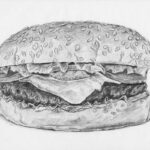 How to Draw a Hamburger Intro – Getting Started 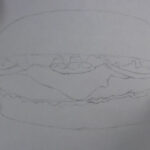 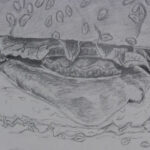 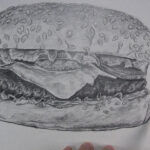 How to Draw a Hamburger Part 7 – Finish the Hamburger Drawing