Draw the Front of the Brim

Now let’s look at drawing the brim. For the front part of the brim of the cowboy hat, we can draw what from this angle will look like a rhombus shape.

Begin by sketching a line going down at an angle from the front lower base of the crown.

Then, from the bottom of this line, sketch another line going to the right. This line should be roughly parallel to the base of the crown.

Finally, sketch a third line going from the last line to approximately the center of the crown base. This line should be parallel to the first one you drew. You should end up with what looks like a diamond or rhombus shape.

Draw One Side of the Brim

Now let’s draw one side of the brim of the cowboy hat. We will begin by drawing the brim on the cowboy’s right side, which will be our left side. From the front of the brim, sketch a curved line that angles toward the lower part of the crown.

Now sketch a straight line from the lower part of the crown to outermost curve. This line helps to establish a bend in the brim of the hat.

Now, sketch another line parallel to and following the contours of the side of the brim. This line is for the outer seam that goes all around the brim of the hat. Extend this line to the front of the brim as well, on our rhombus shape.

Draw the Other Side of the Brim

Now it is time to draw the other side of the brim. Continue with the seam line from the front of the brim and extend this line running parallel to the brim outline and all the way to the base of the crown.

After that, make these two parallel lines longer so they overlap the hat band we drew earlier. If you recall from before, I said the brim will conceal the back of the hat band. This is our way of bringing this portion of the brim to the foreground and pushing the hat band and rest of the crown farther into the background. Be careful that you don’t bring these two lines too far above the hat band like I’m doing here. This is a mistake that I need to fix.

Continue drawing the two lines of the brim from the crown to the rear of the hat. Make them a little wiggly close to the back, but keep them parallel to each other.

Continue curving the brim along the back by extending the top of the two lines. Make the bottom of the curve stick out a little more than the top. From this point, we can leave this bottom line of the brim where it is.

From some distance under the rear of the crown to where we left off, sketch a curved line to represent the remainder of the cowboy hat’s brim.

Now we need to sketch the underside of the brim that fits around the cowboy’s head. Do this by sketching a somewhat irregular shaped line a short distance under the brim of the hat.

Since this part of the brim is in the foreground, we need to erase inside the brim where it overlaps the lower crown and the hat band. This should complete the brim, as well as the entire outline of our cowboy hat! 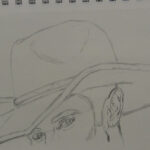 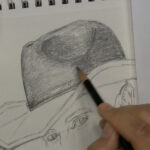 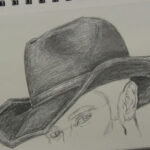 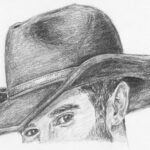