How to Draw a Dog Face – Intro

Let’s first see how to draw the head of a dog. Start with an HB pencil and a rough sketch of a circle for the dog’s head. Now your circle doesn’t have to be perfect, but the more you practice this freehand drawing of a circle, the easier it will become for you.

Next, sketch a vertical line and a horizontal line for some facial guidelines. Notice that there is an ever so slight curve to each of these lines. This is because the dog’s face is tilted slightly to our left and very slightly up.

Plan the placement of the eyes. They should be approximately an equal distance from the center. Then, sketch the shape of the snout. Extend the snout below the circle and make the bottom parallel to the horizontal guideline on the circle.

Now let’s work on developing the shape of the dog’s eyes. Although this dog has some large eyes and very round eyeballs, the shape of the skin surrounding the eyes is very angular. They almost resemble pentagons, but they still have some curvature.

Start sketching the brow on the side of the face next to the dog’s right eye. That’ll be on our left side. Then sketch the outline of the nose. Pay attention to placement in relation to the surrounding features. For example, the left edge of the nose is a little to the right of the dog’s right eye. Similarly, there is more space between the dog’s nose and his left eye due to the turn of his head.

Draw the Dog’s Ears and Nose

Since the face of this dog we are drawing is the face of a bulldog, there are a lot of wrinkles or flaps, especially around the nose and mouth. Start by sketching some wrinkles extending from the nostrils and a short line below the nose.

Now, let’s see how we can draw the mouth of the dog in a way true to the reference. Start branching out the mouth from the short line below the nose. Keep branching out until you are aligned with the inner corner of the eye. Then start curving the bottom of the snout. Repeat this on the other side. Check the slope of the line connecting both sides of the bottom to make sure it is the same angle as the horizontal guideline of our original circle.

Draw a slightly curved line to show the opening of the dog’s mouth. Repeat this for the bottom of the lip. Although we don’t have to with this drawing, there will be occasions when drawing a dog’s mouth requires you to draw its sharp teeth. Draw what looks like a “W” shape under the mouth. Leave a little space between this and the bottom lip. Draw the lower area of the snout with some wrinkles along the lower edge.

Draw the Dog’s Eyes and Side of the Face

Here’s how to draw dog eyes step by step. Starting with the eye to our left, I’m sketching a line on the underside of the brow to allow for how much it protrudes. Then, we can draw a squarish highlight. For this iris and pupil, try to draw them as circular as possible. For the other eye, I’m drawing the iris and pupil first. I’m saving the highlight for last. The order doesn’t really matter. Just make sure you leave a little opening for the highlight.

From the edge of the iris, we can see a little wrinkle on the brow. As we keep looking at this brow, we can notice even more wrinkles. There are some pretty deep and significant ones at that. Keep drawing lines to develop the shape and wrinkles of the brow.

Sketch a thin line just under the eye to represent the eyelid. Also, there is a long fold or wrinkle on the side of the face running along the brow. Develop the top portion of the brow a bit more. Draw a line running along the white patch of fur going down the dog’s forehead. Curve this line downward to shape the side of the snout. Then sketch a few more wrinkles under the eye and on the cheek.

Draw the Rest of the Upper Face

Draw a tip to the bottom of the brow to the left of the dog’s right eye. Draw a dip in the brow similar to what the other brow had. There’s also a long wrinkle along this side of the face. Now, I’m defining the outline of the snout. Since the head is slightly turned, make sure the snout overlaps the corner of this eye just a little. Sketch a few lines to develop the area above the brow.

Draw a line for the side of the face that hides behind the dog’s protruding brow. Draw the bumpy contour that is the top of the dog’s head. Afterwards, start drawing some of the forehead wrinkles and the edge of the white fur pattern. There are several overlapping layers of thick, flappy skin, so it’s helpful to use the reference photo as a guide.

Since we have our facial features in place, we no longer have a need for our guidelines. Use a kneaded, plastic, or regular eraser to get rid of them. The kneaded eraser is best for maneuvering around those very tight areas.

The design pattern on this dog or any other animal must follow the bends and folds of the surface upon which it lies. Draw the outline of the white fur pattern. Make sure to curve the outline up and around the wrinkles. Draw the frown lines, or forehead furrows, between the eyes, just above the dog’s left nostril.

Finish Outlining the Snout and Ears

Draw a bumpy line going down each side of the snout. These lines represent the outer edges of the rows of wrinkles between the nose and the mouth from where some of the whiskers originate.

From these two outlines, just begin sketching very light lines indicating the folds. These light lines should travel upward toward the nose. Also, there is a bit of curvature on some of the lines.

That just about does it for the line drawing of our dog’s face. We can start shading in the next steps. 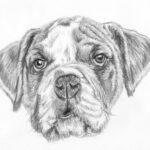 How to Draw a Dog Face Intro – Getting Started 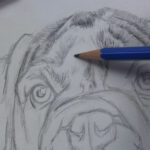 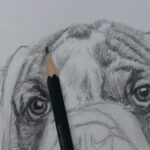 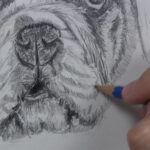